Seva: Helping the dying in Calcutta

The Sanskrit word Seva translates to « selfless service » or work done with no expectation of return or repayment. In ancient India, Seva was part of spiritual growth. It is an action that benefits all involved.

Seva is something I’d wanted to experience in India for a long time. To love and to nurture is part of my nature. I can’t help it. It’s an energy that runs through me, and that requires no extra effort. Going to The Mother House in Kolkata had been a longtime project of mine; not to kneel in front of Mother Teresa’s grave, or pray to God, but to obtain the pass that would allow me to spend a few hours amongst the dying in Kalighat, a hospice opened by Mother Teresa in 1952. 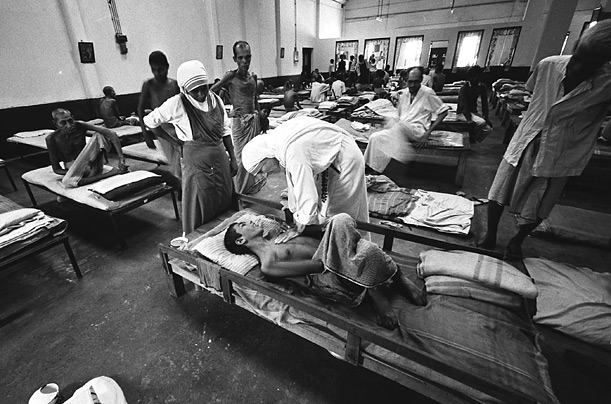 I spent a few incredible hours there. Even if the place was a bit sad: rows of beds and women whose heads had been shaved clean to avoid lice, their bodies turned skeletal from disease , their skin dry and for some riddled with sores that had been wrapped in gauze. When I arrived, I was alone in front of 30 women, some naked, as the sisters were busy elsewhere. Shyly, I took a few steps, forcing myself not to feel uncomfortable by the 30 pairs of eyes staring directly at me. Instinctively, I smiled, and a woman motioned for me to come help her get up from her bed. As I approached, another grabbed my hand. I instantly squeezed it and smiled, noticing her eyes sparkling as I did; a brief moment of warmth. The woman put her hands in prayer at her forehead to thank me and that was all. Only a touch, a squeeze, and a look of complete tenderness.

Then an older woman, who didn’t seem to realize she’d let her frock fall to the floor and was sitting there naked, called on me: « Didi! » I rushed over to cover her up and tied the back of her dress. She grabbed my hand and put it on her back. For a few minutes I massaged her frail shoulders and before I was done, more women were calling me to do the same. I must have massaged 10 women, most of them thanking me with a smile before lying back down on their beds. None of them spoke a word of English.

I was then asked by a sister to feed a woman who seemed to be between life and death; she couldn’t sit up to eat, and didn’t speak or move much either. But she ate an entire plate of rice and potatoes, starring at me blankly as I made little sounds with each spoonful I brought to her lips, as though feeding a child.

I remembered my last visit to the hospital when I went into anaphylactic shock, I could barely breathe, enough to repeat « help me », when I grabbed onto someone’s hand and held it tightly; it was a reflex, a deep need to hold onto someone and feel I wasn’t alone.

That’s what I came to do in Kalighat: to hold, to touch and to smile. Without forcing anything, it’s just what came to me. Even while helping a woman pee, or washing another’s face. No disgust, no fear, simply a sense of unconditional love for these dying, and lonely women. It’s not much and it certainly won’t change the fact that they are dying, but for a brief moment it brought back a smile on their faces.

I left Kalighat just as I came, without a halo above my head, or any particular satisfaction; I’d done what I had come to do and I gave whatever I could give. It was simple and incredibly real.

Everyone can practice Seva and help or connect to someone in need. You don’t have to spend money or lose touch with your life and comfort to do so. It’s only a question of human warmth which we all have within us. And so I encourage you, wherever you are, to share some of your light, not in the name of God, or to make yourself feel like a better person, but simply by thinking about that other human being whose hand you’ll grab and squeeze and who will ultimately feel, even for a brief moment, less lonely.

« Loneliness and the feeling of being unwanted is the most terrible poverty. We shall never know all the good that a simple smile can do. » – Mother Teresa